There is a lot of debate over what is the best beef...the fact is whatever you like best - is the right choice for you! 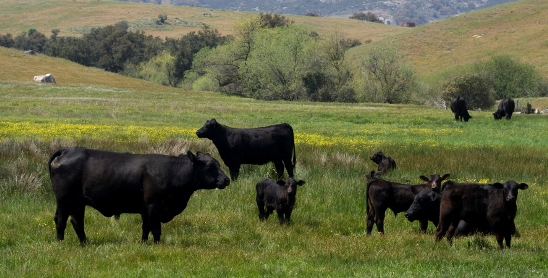 The Skinny About Beef

Until the Europeans came, there were no cattle at all on the North American continent. History indicates that it was the Spaniards who brought over the first cattle, the ancestors of the Longhorn cattle that came to prominence years later.  Now the real consumption of beef and beef production began with the cattle drives of the 1880’s.The descendants of the original cattle brought over 3 centuries earlier, the Longhorns from Texas, were wild cattle. They were rounded up and driven north to the railway terminals in the Midwest and shipped live to the East Coast. These were hard scrabbled, tough animals and the beef they produced wasn’t very good; cheap but not good. The solution was to “fatten“ the animals on grain for a month or so, in order to improve their flavor and put back the weight they had lost while traveling the long distances on the cattle drives. To do this, stockyards were created at the trail heads where the cattle were fed before being shipped.

Additionally, English cattle breeds, particularly Angus, were introduced to improve the flavor and increase the marbling, or intramuscular fat. With the advent of refrigeration in the early 20th century, processing plants were built close to these feedlots with only the meat then being shipped by rail. And this is the model on which today’s industry has grown ever since.

Now at the advent of the 21st century there is a lot of debate over what is the best beef for steaks and roasts. What breed is the best? How should beef cattle be raised? Is beef better grain finished or grass fed? Are hormones or antibiotics used in the raising of beef cattle? Is Dry Aged beef better than Wet Aged beef? Does a steak cook better on the bone? Which cut of beef is the most tender or the most flavorful? There is no wrong answer. Some people will opt for the naturally raised but less marbled beef. Some will prefer a less expensive selection of beef that is dry aged. Some want the most highly marbled piece of beef imaginable. The fact is whatever you like is the right choice and that is what we strive to offer at the DeBragga.com on line store.