DeBragga and Spitler was founded in the early 1920s by men who
knew more about quality meat than perhaps anyone in the country.

Originally named the Brooklyn Hotel Supply Company, it was founded by Joseph DeBragga, Emil Guenther and James Heilman. In the mid 1930s, the company moved to Washington Street in what was to become the “meat market” district of Manhattan. In 1948, the company incorporated under its present name, DeBragga and Spitler, by Farmer DeBragga (Joseph’s son) and Paul Spitler.

In 1954, Marc Sarrazin joined the firm. Marc trained as a butcher at his family’s hotel and restaurant in the Charollais region of France, which is known for producing some of that country’s finest beef. The joy that Marc took in his work, selling New York’s top restaurants the finest cuts of meat, was evident in the strong relationships the company developed under his sales leadership. DeBragga and Spitler was working with the best: Le Pavillon, La Cote Basque, La Caravelle. Andre Soltner of Lutece and Sirio Maccioni of Le Cirque were personal friends.

In 1973, Marc Sarrazin became President of DeBragga and Spitler, and the company became known as one of the finest meat purveyors in the entire industry, working directly with the best restaurants and hotels throughout the New York metro region and the Caribbean. The company’s reputation for excellence, quality and consistency was made, and New York’s Butcher was ready for the next generation of great chefs and restaurants.

Marc Sarrazin retired in 1992, and stepped aside to welcome his son, Marc John Sarrazin, as President of DeBragga and Spitler. The new generation of leadership ushered in the new generation of four-star chefs as customers of DeBragga and Spitler: Daniel Boulud (of many restaurants under his ownership today), Laurent Tourendel, Eric Ripert and Charlie Palmer, just to mention a few. A seamless reputation for the highest quality meats in New York remained in tact under Marc.

In 2006, George W. Faison became a partner at DeBragga and Spitler. George has a long history of excellence in the industry, having founded and successfully operated D’Artagnan for twenty years, a company specializing in quality prime and natural meats, game and foie gras. By joining forces with New York’s Butcher, George was able to add another layer of super star chefs, counting among them Tom Colicchio, Jean-Georges Vongerichten, Alfred Portale and Terrance Brennan. Today DeBragga is selling top quality meats to New York’s hottest spots like David Chang’s Ssam Momofuko Bar and Tao among others. Great restaurants, great meats.

In 2011, DeBragga moved from its historic space in New York City’s meatpacking district to brand new, generous quarters in Jersey City, New Jersey. The location allows DeBragga to expand its business and its offerings, and today, over half the meats sold are naturally raised, without antibiotics or hormones.

In 2013, DeBragga proudly welcomed the third generation of Sarrazins to the helm. Eric Sarrazin graduated from Wake Forest University and worked in project management at a digital advertising agency before joining the company. He continues to work in all sectors of the business to learn it well before stepping into a leadership role.

In 2015, George W. Faison left the parent company to pursue other interests. 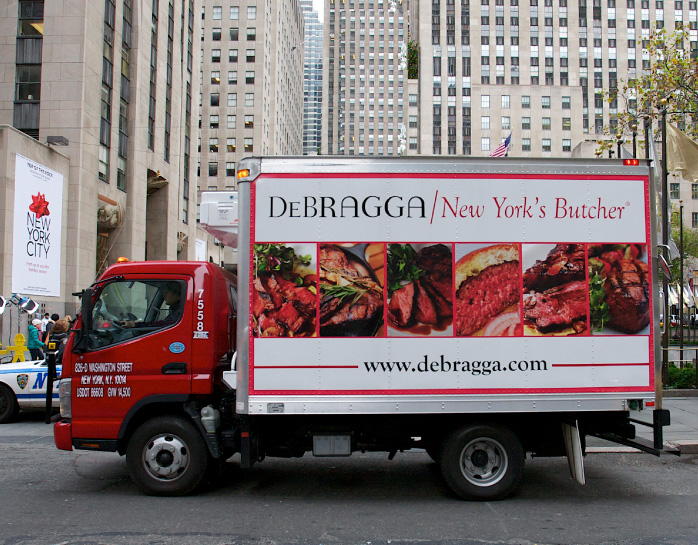 The company is continually searching for the finest sources of top quality meat
products. This commitment to excellence enabled DeBragga and Spitler to become
the sole New York City-based distributor for “Certified Angus Beef” in 1982, which
was one of the original branded heritage breed programs under the supervision
of the United States Department of Agriculture.

This tradition continues with the Wagyu beef from Miyazaki, Japan, hailed as the finest wagyu of all, plus wagyu from Australia and the United States, naturally raised beef, pork and lamb from Iowa and the Midwest, North Carolina heritage breed poultry, and real Long Island ducks. Today, DeBragga is building its own industry with grass fed cattle in New York State, and raising its own heritage breed hogs – Gloucester Old Spots, the rarest breed in America – and pure blood Berkshires.

And now, these top quality meats are available to consumers nationwide... In 2007, George and Marc developed a consumer online store at DeBragga.com that allows people across the country to purchase the meats, poultry and more that have been the exclusive property of our highest rated restaurants and chefs. With the finest quality meat products, selection and delivery, now, everyone can cook like a legendary chef.