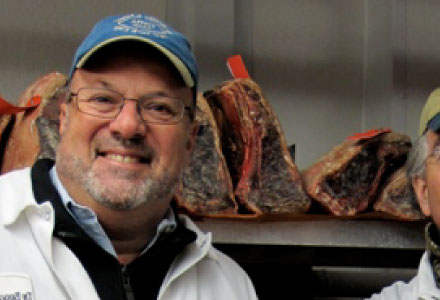 The Sarrazin family has had a long history in the food and hospitality industry. Born in New York, Marc John spent his summers in France at his grandfather’s charcuterie and his grandmother’s café. There he learned at a very young age the importance of quality products and superior service.

As his Dad was building the business and reputation of DeBragga and Spitler, Marc was a keen observer, learning the meat business from him as well as acquiring his intuitive business acumen. He attended Fordham University earning both his BA as well as his MBA. While studying for his MBA, Marc began his career at DeBragga & Spitler, starting from the ground up, as a sales associate, working his way to Vice President.

When Marc Sr. retired in 1992, Marc John was named President of the company. He spent several years as an adjunct professor teaching Food Purchasing at the New York Technical College in their Hotel and Restaurant Management Department. He has served in various capacities in many industry organizations which support and award scholarships to students studying food service, such as the Société Culinaire Philanthropique and the Partridge Scholarship Foundation, where he also served as President. He is an allied member of the Hotel Association, The Food & Beverage Managers Association and Club Managers of New York. Marc was recipient of the Lifetime Achievement Award from the New York Guild of Chefs in 2005 and named Purveyor of the Year for 2001 by the Food and Beverage Managers Association.

Marc currently sits on the Board of Trustees of the Culinary Institute of America, as well as the Escoffier Society. Marc’s passion for food and his commitment to the food service and hospitality industries, coupled with beliefs he had internalized at a very young age – quality products, superior service and integrity – have guided him successfully throughout his career.

His leisure time is spent golfing and entertaining friends and family. His pride and joy are his family, comprised of wife Bernadette, and children, Kristen, Eric, Peter and grandchildren. 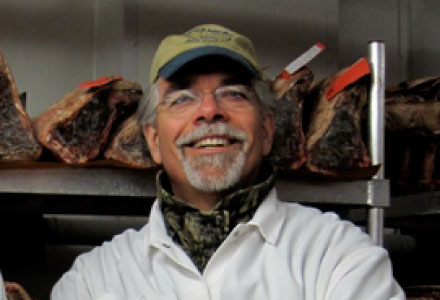 George Faison has always had a passion for great meat, meaning meat that is unspoiled, unaltered, often wild, and sustainable. His career, spanning upwards of forty years, working with the finest, purest ingredients, mostly meats, is an extension of his dedication to the animal, developed as a youth in Texas. As a son of the Lone Star state, George Faison learned as a youth to honor nature through scouting activities and as a hunter. Following in family footsteps to college at Washington and Lee, George went on to get his MBA from Columbia University. He immediately went to work for Les Trois Petits Cochons, the first maker of natural pates in the U.S.

After three years working in the national sales and operations arena, he and a former fellow Columbia student and friend, Ariane Daguin, moved on to open the company that would wake up our nation’s palate by introducing luxury meat products such as foie gras, organic poultry and game meats into our collective diet. That company was D’Artagnan, Inc. Founded in 1984 on the premise of clean, unique and sustainable, the company would grow to make other luxury ingredients widely available, such as wild mushrooms, truffles and company branded meat products like pates and sausages. George became a partner and COO at DeBragga and Spitler in the fall of 2006.

George has served the greater good of the food industry as a leader of organizations, including six years as board member and co-chair of the strategic planning committee of the National Association of Specialty Food Trade, and on the National Board of the American Institute of Wine & Food as finance chair, as well as serving as New York chair of this organization. He currently serves on the Culinary Advisory Council at the invitation of the Dean of Culinary Studies, Brendan Walsh, at the Culinary institute of America.

George has been honored for achievement by his peers with both the Food Arts magazine Silver Spoon Award, and the Who’s Who of Food & Beverage in America, The James Beard Foundation. In 2005, he received a Lifetime Achievement Award from Bon Appétit magazine.

George loves to hunt, fish, ski, garden and cook. He is also a Certified Full Leader of the Mankind Project International. He resides in the wilds of New Jersey with his wife, Stephanie and their two Brittanies, who love nothing more than hunting woodcock and grouse.

In early 2015, George resigned his position of COO at DeBragga & Spitler. He remains a partner in 2 ventures founded during his tenure, DeBragga Mailorder LLC, dba DeBragga.com, as well as DeBragga’s own regional livestock procurement business, DeBragga Grassfed LLC — responsible for sourcing Grassfed and finished cattle, apple fed Lamb and raising their own award winning Gloucester Old Spot hogs with the Amish community in Upstate New York.